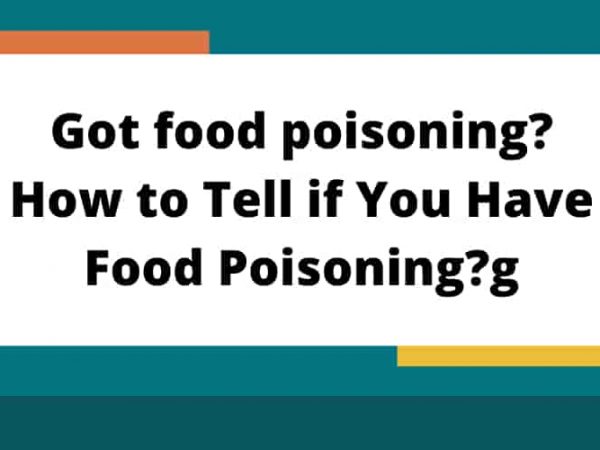 You can reduce your risk of food poisoning by staying informed and following some simple guidelines. How to tell if you have food poisoning?

It is important to realize if you are suffering from food poisoning. Foodborne illnesses are not only unpleasant but could become serious, even deadly.

Adequate food safety practices can lead to less many cases of food poisoning and other serious illnesses. If you are suffering from food poisoning, it is important to see a doctor immediately.

What is Food Poisoning?

Food poisoning is defined as any illness you get from eating bad food. The bad food could potentially contain toxic substances or bacteria that cause you to feel sick or vomit. Not only does it make you sick, but it can make the people around you sick as well.

Understand the Difference between Food Poisoning and Stomach Bugs

Food poisoning and stomach bugs are both unpleasant and can lead to similar symptoms. But they’re caused by different things and treated differently by your body, so it’s important to tell them apart.

Many different viruses and bacteria can cause stomach bugs. On the other hand, food poisoning is usually caused by toxins produced by certain kinds of bacteria. The difference is important because the treatments are different.

Stomach bugs cause vomiting and diarrhea, which can lead to dehydration. The treatment is getting lots of good fluids into the body. It’s also important to rest and avoid anything that can dehydrate you further, including alcohol.

The toxins produced by certain bacteria cause food poisoning, so antibiotics are useless even if you have an upset stomach. You should get plenty of fluids, so your body doesn’t become dehydrated, but you should avoid liquids that will further upset your stomachs, such as coffee or tea.

Both types of illness are uncomfortable but not life-threatening. They’re usually over in a few days, although it’s best to rest until you’re feeling better.

Food poisoning can be caused by a variety of microorganisms, such as:

Viruses, parasites or chemicals can also cause food poisoning.

Food poisoning is one of the most common reasons people call in sick to work. Symptoms range from mild to severe, and most people will never know the true cause of their illness.

What are common signs?

You can have one or more of these symptoms at once. Some people only experience mild symptoms while others develop more serious ones. The severity of your symptoms depends on the type of bacteria you ingested along with how much you ate. The more you eat, the greater the chance of getting sick.

If you are experiencing any of these symptoms, contact your doctor for advice on what to do next. Your doctor may tell you to stop eating and drinking anything while they decide if you need to go to a hospital or not.

If you have been eating fried, baked, salted, preserved foods, then your body will show some signs of discomfort. You may experience some of the following symptoms.

The treatment includes the following things.

Symptoms of Food Poisoning From Chicken

In some cases, the symptoms of food poisoning from chicken include:

These symptoms typically appear within a few hours after eating the chicken and last up to 3 days or longer.

The symptoms of food poisoning can vary widely from person to person, but there are some common signs you should watch out for if you think you’ve been poisoned.

The three types of hazards that make food unsafe are chemical, physical and biological.

If you have these symptoms, you’ve likely been poisoned.

Vomiting, diarrhea or stomach cramps. These are all classic signs of food poisoning.

Headache or dizziness. If your head is pounding and you’re generally feeling sluggish, chances are your body is having problems digesting something in your stomach.

Nausea or vomiting that doesn’t go away with medication. You probably won’t be able to eat anything for a while if you’re that sick. What’s more, if nausea doesn’t subside after several hours, chances are you’re not making any progress on getting better, either.

Chills and fever. If your body temperature is consistently low or high, it’s time to worry about food poisoning because these are the symptoms of an infection rather than a virus or other sickness.

What Happens If You Get Food Poisoning

Food poisoning can make anyone miserable. It’s important to know what to do if you or a family member develops this condition.

To be on the safe side, it’s best to call the doctor immediately if any of the following symptoms appear:

You might not realize that food poisoning is serious until several days after the initial bout of vomiting and diarrhea. The effects of dehydration can be severe and even deadly. Be sure to drink plenty of fluids as soon as you start having signs of food poisoning.

Food poisoning is a very common and serious health problem. It can occur in anyone, and it’s something everyone wants to avoid.

How long does food poisoning last?

The length of time varies from person to person. The symptoms typically last for about 1-2 days but can be much longer depending on the cause of the food poisoning. Some people are affected by diarrhea and vomiting for as many as seven days.

Food poisoning occurs when you consume contaminated food or water. The most common ways that food becomes contaminated with bacteria and viruses include:

Contaminated water used in food preparation is one of the most common ways for people to get food poisoning. In fact, many cases of food poisoning occur at restaurants due to poor sanitation practices such as failing to wash hands before handling food, not cleaning cooking equipment after each use, not washing vegetables thoroughly and keeping foods at too warm an environment (such as above 40 degrees F).

Poorly prepared meat is another common cause of food poisoning because it can become infected with bacteria such as E. coli and salmonella (which comes from raw eggs) if it’s not cooked properly or handled properly after being cooked.

How to Tell If You Have Food Poisoning

It is difficult to tell if you have food poisoning, but a few things can help. Do you remember what you ate? If you or someone else in your house was sick after eating the same food, then it is likely that food poisoning was the cause. If everyone in your family ate the food and no one got sick, it could be a stomach virus. How long ago were you sick? If it has been more than 48 hours since you were sick, then most likely it wasn’t food poisoning.

Food poisoning symptoms usually come on suddenly, within 6-48 hours of eating contaminated food. It is usually mild nausea and vomiting that goes away after one to two days. The main exception is botulism, which can cause paralysis and be life-threatening. Food that appears spoiled could also be a sign of food poisoning because some bacteria grow faster at room temperature than in our bodies.

If you think you might have food poisoning, here are some other clues: Did you cook the food yourself? This includes foods like potato salad made from potatoes that were left out too long or homemade bread. Did the store sell spoiled meat, seafood, or produce? Was it properly stored? Was it cooked thoroughly? Were leftovers kept at room temperature for too long?